Please note that the upgrade to V4 from V3 is a paid upgrade.

Thank you, your download link will be sent to you in the next few minutes...

While you're downloading, take a moment to watch our "Easify Quick Install" video tutorial

Thank you, your download link will be sent to you in the next few minutes...

EASU ECommerce Connectors can be used to help you connect EASU and Easify to your online shop.

They are free to download and are open source so you are free to use them with the shopping carts they were desgined for, or you can modify them yourself to work with whatever shopping cart you happen to use.

The above connectors come as a zip file that contains all you need to get started, full instructions can be found within the zip file.

Because of Windows security features, if you are using Windows Vista or later, you will need to right click the help file after you have downloaded it and select Properties, then click the "Unblock" button.

Enter your email address and we will email you your download link.

You may also choose to opt in for our email newsletter which we send out every few months. We won't sell your email address and we promise not to spam you!

Should you decide to keep Easify after your trial has expired you simply purchase a license key which will unlock the trial version making it yours to keep.

This version brings you minor bug fixes that were included after the main Feature Pack 8 release.

This version includes support for EASU 1.0.0.2 and product importer enhancements as well as minor updates and bug fixes...

This version includes OSCommerce and ZenCart eCommerce integration as well as minor updates and bug fixes...

The Easify Advanced Server Upgrade is an optional paid upgrade that brings extra functionality to Easify such as scheduled recurring orders, purchases and backups, as well as multi company support and eCommerce connectivity.

This release brings you some minor updates and bug fixes that have been added since Feature Pack 5 as well as support for the Easify Advanced Server Upgrade (EASU)...

Easify FP4 sees the introduction of a cashbook along with the ability to record payments for purchases. We've also introduced real-time profit and loss reporting among other handy financial tools.

Feature Pack 4 also includes a host of other upgrades and mods that you have asked us for, and makes this the best and biggest update we've done so far.

FP4 also features various minor bug fixes and updates that have been resolved since the previous release.

New for this version is a fully featured product import facility, the ability to export sales and purchasing data to CSV, default product margins and editable order types.

FP3 also features various minor bug fixes and updates that have been resolved since the previous release.

V3.27 also featured numerous bug fixes and updates which had been implemented after the initial public release.

Subscribe to our newsletter and receive exclusive discounts - we will not spam you! 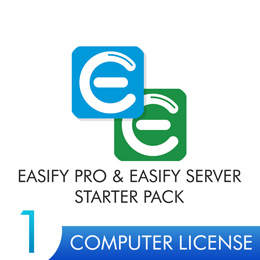